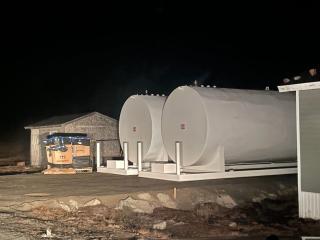 After five years without a gas station, the community of Black Tickle, a remote First Nation village near the Labrador coast on the Island of Ponds, will soon be home to new tanks and dispensers with a c-store opening later this year.

In 2016, the Woodward Group of Companies closed the only gas depot in town, citing money loss on the operation. After the closure, residents of the tiny fly-in/ferry community, home to 84 persons, had to travel 85-kilometres to fill up tanks for vehicles and home heating fuel.

The new gas station is being opened via a partnership involving Black Tickle, the NunatuKavut community council, the provincial government, and Indigrow, an Indigenous Atlantic Canada company that helps build Indigenous businesses by providing training and expertise.

There are two phases to the social enterprise gas station project. The business will start this winter without a set location, moving tanks between a couple of places on designated days until the permanent site is built in the spring. Several factors, such as snow clearing and community need, will determine the permanent location of the new facility.

According to Rich Lewis, founder and president of Indigrow, an organization leading the initiative, the site will not become a traditional gas and convenience store until Phase 2 in the spring.