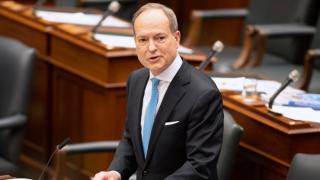 Ontario Finance Minister Peter Bethlenfalvy delivered his first provincial budget after stepping into the role of finance minister in January.

Ontario’s $186-billion spending plan contains a number of initiatives to help small businesses and while there wasn't an overt commitment to bringing beer and wine to corner stores, there was a recognition of recent efforts by the industry to keep this issue top of mind with its #ConvenienceandChoice campaign.

Two years ago—March 2019—during the Conservative’s first budget, Ontario's then-finance minister Vic Fedeli said the province would keep its election promise and was moving ahead with an expansion of beer and wine sales in corner stores. The announcement was met with opposition from The Beer Store and, while it’s been two years of delays as a number of related issues are worked out, the convenience industry is in it for the long-haul and continues to advocate for the change.

The Convenience Industry Council of Canada, Ontario Korean Businessmen's Association, Ontario Convenience Stores Association and Free My Booze recently formed a coalition, calling on Queen's Park to fulfill its promise. In the lead up to the budget, the coalition embarked on a targeted social media campaign designed to put the issue front and centre as the government prepared to table this latest budget.

The move, according to the coalition, had the potential to fulfill two important goals—give Ontarians more choice, while supporting local businesses that have been hard hit by COVID-19.

As CICC reports, "Minister Bethlenfalvy’s budget speech included a nod to the initiative, demonstrating to us that the government hasn’t lost sight of their commitment and giving us the opening we were looking for to continue our advocacy."

Supporting Restaurants and Bars During the COVID‐19 pandemic, the Ontario government is supporting jobs in the hospitality sector by: Permanently allowing licensed restaurants and bars to include alcohol with food as part of a takeout or delivery order to help restaurants, bars, breweries, wineries and distilleries rebuild and recover. This is one more step in the government’s work to ensure choice and convenience for consumers.

While the budget didn't include immediate plans for beer and wine in Ontario convenience stores, consumers will now be able to purchase locally made craft beer at farmers' markets.

The budget also contained funds to help hard-hit small businesses, which could include some independent owner operators.

The government said it will offer a second round of grants to small businesses and create a new job training tax credit. The grant program, first introduced in January, provides between $10,000 to $20,000 to help small businesses affected by provincial lockdowns.

The government estimates the program will cost $3.4 billion and help an estimated 120,000 small businesses.

A spokesperson for the Canadian Federation of Independent Business told The Canadian Press the group applauded the government's move to double grant funding for small businesses, but asked for some amendments.