Parkland Corp. says it plans to spend $600 million to increase renewable fuel production at its Burnaby refinery in British Columbia.

The Calgary-based fuel retailer says it will ramp up the amount of renewable material it currently refines alongside traditional petroleum-based materials by 5,500 barrels per day.

Parkland says it also plans to build a stand-alone renewable diesel complex within the Burnaby refinery, capable of producing 6,500 barrels per day.

The company says the renewable fuel it produces will have one-eighth of the carbon intensity of conventional fuels and reduce related greenhouse gas emissions by approximately two million tonnes per year.

Parkland says the B.C. government will support over 40% of the project costs in the form of low-carbon fuel credits.

"I applaud the Government of British Columbia for their vision and support of these innovative projects,” said Bob Espey, Parkland president & CEO. “This announcement advances our decarbonization strategy and our commitment to provide customers with low carbon choices which help them meet their environmental goals. Renewable fuels play a critical role in Canada’s climate ambitions by enabling customers to reduce their carbon footprint using their existing vehicle.”

"Parkland's plans to increase our province’s renewable fuel capabilities support our Clean BC targets," said The Hon. Bruce Ralston, Minister of Energy, Mines and Low Carbon Innovation. "This is a big step forward in our transition to a lower-carbon economy. Harnessing Parkland’s technical expertise and infrastructure to lower the environmental impact of our transportation is something we can be proud of. When combined with BC’s other sources of renewable power and efforts to electrify the passenger vehicle fleet, we continue to set the bar for Canada."

In addition, the project is expected to directly create up to 1,000 "high-quality, family sustaining jobs during the construction phase."

Last week, Parkland reported earning $387 million in adjustable EBITDA (before interest, taxes, depreciation and amortization) in the first three months of the year: A 23% increase over Q1 2021.

“Parkland delivered an exceptional quarter against a volatile backdrop: the ongoing COVID recovery, inflation and the invasion of Ukraine,” Espey said during a conference call with analysts.  “[This] has set the stage for a strong year.”

In the Canadian market, adjusted EBITDA was $191 million – an increase of 22%, or $42 million, on a comparable basis from Q1. That represents 49% of the Calgary-based retail and petroleum company’s total EBITDA.

In the call with analysts, Epsey doubled down on a goal for Parkland to reach $2 billion of adjusted EBITDA by the end of 2025, a commitment the company made early last year.

-with files from Michelle Warren and Chris Daniels 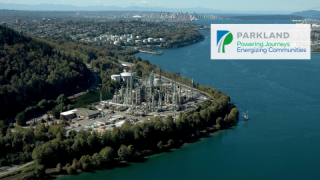