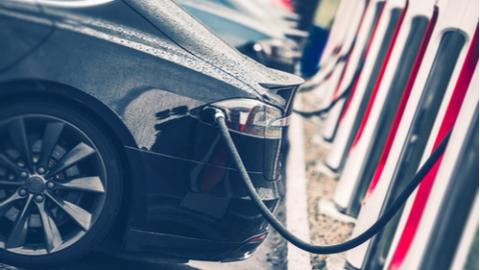 Sky-high gas prices are pushing electric vehicles (EVs) further into the spotlight as of late, as more drivers think seriously about going electric.

Marketing professional Ash Molaei is one those people.

"Gas prices are a big reason why I'm considering switching my relatively new sport utility vehicle for an electric one,'' he said in an interview.

The average gas price across Canada was $1.70 per litre Friday, according to the Canadian Automobile Association (CAA), up 38% from a year ago. Some parts of the country have seen prices broach $2 per litre in recent weeks.

In a recent KPMG survey, 61% of Canadians say rising gas prices and oil supply challenges have convinced them that it is time to buy an EV, with 51% of respondents saying they will never buy a gas-powered vehicle again.

Meanwhile, 6% of Canadians say they ordered an EV in the past month.

Joanna Kyriazis, program manager of clean transportation for Clean Energy Canada at Simon Fraser University, says EV drivers can insulate their wallets from geopolitically driven fossil fuel price swings such as what we're seeing as a result of the war in Ukraine.

"Owning an EV means you never have to drive by the sign outside the gas station and worry about what price you might see,'' she said in an interview. "Fully charging a 413-kilometre range 2021 Chevy Bolt at home would cost $5 to $13, depending on which province you live in.''

Kyriazis says that prices are likely to come down, however. The price of batteries used to power EVs are already dropping due to factors including growing manufacturing capacity, higher demand for batteries from leading manufacturers and new battery cell and pack designs, according to a November 2021 report from strategic research provider BloombergNEF.

Kyriazis explains that even though the upfront costs are generally higher compared to conventional vehicles, EVs could be more cost-efficient in the longer term.

"It doesn't take very long, sometimes just a year or two, before fuel savings make your EV cheaper than your gas car,'' she said.

There are some additional incentives: there's a federal rebate of up to $5,000 and a growing number of provinces and territories offer rebates as well.

In Ontario, where a previous rebate was later cancelled by Premier Doug Ford, the province and federal government announced millions in funding support for domestic hybrid car production last week but both Ford and Prime Minister Justin Trudeau dodged questions on the possibility of incentives to help Canadians buy them.

The steeper price tag does not worry Molaei. It is Canada's lack of infrastructure for EVs that he is concerned about, like making it easier for people to charge their vehicles at home overnight.

He also likes to go on a lot of road trips, so the lack of charging stations in remote areas is something he is thinking about.

Cara Clairman, founder and CEO of Toronto-based Plug'n Drive, says we need to approach charging stations a little differently than we approach gas stations, and also ensure that we have banks of chargers, not just one thrown out in the middle of nowhere.

"We don't need them everywhere,'' she said in an interview. "We need to map out the places people would likely stop and want to eat or even shop during longer trips and put chargers there.''

Another hurdle is the lack of vehicles available and the length of time it will take for buyers to receive them - a year in many cases. Lingering supply chain issues stemming from the COVID-19 pandemic could keep wait times long.