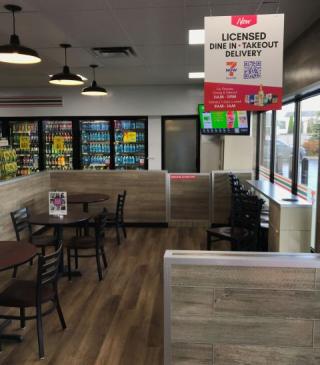 Of-age customers can now pair their meal with beer and wine in the remodelled dining areas, or order beverage alcohol to-go through take-out and home delivery. All staff who handle alcohol at these sites are ProServe trained.

7-Eleven Canada now operates four licensed restaurants in Alberta and intends to expand the program to ten locations before the New Year.

An Edmonton pilot location at 14110 127 St., which is also home to a Petro-Canada gas station, was licensed a year ago and 7-Eleven said in a statement it "has been well received by local patrons."

“We’re pleased to expand our licensed restaurant format to more communities in Alberta after receiving positive feedback from our original location in Edmonton,” said Marc Goodman, vice-president and general manager, 7-Eleven Canada. “For more than fifty years, 7-Eleven Canada has continued to innovate to better serve the communities we’re a part of. We’re proud to invest in these communities, create new jobs, and contribute to the economy.”

In summer 2021, as part of an effort to reduce red tape, the Alberta Government announced that the Alberta Gaming, Liquor & Cannabis (AGLC) was moving ahead with plans to relax rules around alcohol consumption. In a release, the government said AGLC removed “unnecessary restrictions on liquor sales, promoted responsible and safe drinking in designated parks and helped many businesses survive the recent pandemic.”

This allowed restaurants, bars and other liquor licensees to sell alcohol with takeout and delivery orders. As part of the changes, convenience stores with a defined dining area are treated like restaurants. In addition, regulations stipulate c-store staff must have Pro-Serve Liquor Training and alcohol must be stored in locked coolers

7-Eleven Canada says it "has a strong age-restricted sales policy and controls in place alongside foodservice training."