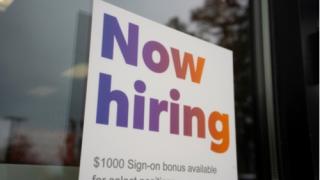 Canadian retailers expect competition for workers to heat up over the next 12 months as the country's jobless rate hits record lows.

A new survey by Deloitte Canada released Tuesday found the fight for talent is expected to emerge as one of the greatest hurdles over the coming year, with 77% of retailers polled saying they believe it will be tough to hold on to their best employees.

Labour shortages are expected to be most acute in store operations, customer service and IT departments, Deloitte's 2022 Canadian retail outlook found.

Meanwhile, supply chain difficulties remain top of mind for retailers, with 87% saying worsening supply chains are the biggest risk for 2022.

The vast majority of retailers said they expect customers to prioritize stock availability over brand or store loyalty, making the avoidance of so-called stock-outs - when inventory or products are out of stock - a top priority.

Almost two-thirds of retailers polled said they plan to diversify their overseas supplier network, while 10% said they will reduce their reliance on overseas vendors altogether.

The Deloitte survey also found 70% of retailers expect staff-free, cashier-less stores to be common within a decade.