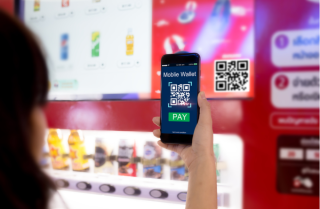 America is a breeding ground for innovation. Take Dean Kamen, serial inventor and entrepreneur. His name may not ring a bell, but you’ve likely heard tell of some of his inventions.

Dean is the guy responsible for theSegway—the two-wheeled self-propelled device that you often see groups of tourists scooting around on. The prototype, code-named 'Ginger', was launched at the end of 2001 live on TV on ABC's Good Morning America.

Kamen holds more than 400 patents, many in the field of medical devices, including the following:

After Kamen developed Slingshot, he understood both its potential—more than 2 billion people worldwide lack consistent access to clean water—and his own limitations in terms of being able to bring Slingshot to places across the globe where the need was greatest.

Kamen approached Coca-Cola, an international distribution marvel, for assistance. Coca-Cola agreed to use its contacts and supply chain to help, but had a big ask: The beverage giant challenged Kamen to develop a better soda fountain. What he came up with became the Coca-Cola Freestyle.

Kamen leveraged technology from the medical device industry to re-imagine the traditional soda fountain. Instead of a rudimentary dispenser offering six to 12 distinct types of beverages, the Freestyle uses a cartridge-based system of delivery. Kamen introduced a system of microdosing, resulting in a machine offering hundreds of choices, from legacy brand soft-drink formulations to limited time offers, private label blends and infinite custom flavours created by consumers.

Freestyle rolled out in test markets in 2008. By 2012 there were 2,000-plus locations around the United States. Freestyle won the 2011 Edison Award, and was recognized by Forbes as the coolest product of the decade. Coke now has more than 40,000 Freestyle machines in approximately 30,000 worldwide locations.

Success can bring its own problems. Early consumer testing determined that a regular dispenser required about seven seconds per user to self-serve fill their order. Freestyle took about twice that time, but at 15 seconds was still manageable. However, as consumers experienced how to use Freestyle and learned to build unique new combinations, wait times increased.

In 2019, Coke introduced a mobile Freestyle app that consumers could use to streamline their experience using smartphones, QR codes and geo-locators to find nearby dispensers. The app enables users to create, save and share custom mixes. It also includes a loyalty component, with promotional challenges, achievements, special offers and prizes.

In the face of COVID-19, the developers bolted-on an added benefit of being able to order and dispense beverages without touching the keypad at all.

A recent piece on our website documented the successful introduction in Ontario of the PizzaForno pizza vending machine and Dark Horse Coffee Automat robotic coffee. While the pandemic has played a part in this, it’s worth noting that first reports of a gourmet pizza vending machine in Italy date back to 2009.

This is a trend with long legs. Convenience operators will continue to look further afield for next level vending solutions that tick these boxes for consumers:

Look to the East

When it comes to vending machines, Japan is Godzilla. The Japanese Vending Machine Association says that if every unit was arranged end-to-end, it would stretch from Tokyo to Hawaii. Japan’s 5 million units—roughly one for every 23 people—generate annual sales of more than $60 billion.

Beyond being omnipresent, seemingly on every street corner, on top of Mount Fuji  and in front of convenience stores, Japan’s vending machines are well known for the unique items on offer (see side bar).

Japan embraced automation very early and with enthusiasm. In many ways, Japan was ahead of the curve. The future of vending in Canada may look a lot like Japan’s present.

There are more than 60,000 c-stores, or konbini, in Japan. It’s the largest c-store market on the planet. The leader in Japan and North America is 7-Eleven. There are actually more than twice the number of 7-Eleven outlets in Japan than in the U.S.

Not insignificantly, 7-Eleven Inc. is a wholly owned subsidiary of Tokyo-based Seven & I Holdings Co., which is publicly traded on the Tokyo Stock Exchange. Given Japan’s fascination with robotics and vending, it seems pretty automatic that 7-Eleven will be the c-store tone-setter in this area.

Plus, with DoorDash’s recent acquisition of salad-making robot company Chowbotics, this opens up an opportunity for c-stores to offer fresh food via advanced refrigerated vending machines.

Keep your eye on the adoption curve of vending solutions by c-stores. Rather than ‘if’, the question for c-store operators in the future will be ‘what’ and ‘when’ to add. It’s okay to not be first to market, and to let the big dog eat. But be forewarned, and be prepared to move quickly to adopt vending technology when the market is established.

The robots are coming

CafeX is a robotic artisanal coffee system that takes orders, makes and serves a variety of drinks at several airport kiosks in California. The process takes seconds, but, while you wait, the robot server entertains by dancing.

Jamba Juice is currently testing in-store robot-made smoothies via a partnership with robot-maker Blendid. The pilot kicked off in a California Walmart store in December 2020. The system is fully touchless, from order to production, payment and delivery. Turnaround time per order is roughly three minutes. System capacity is 45 drinks in an hour and it can produce multiple orders simultaneously.

Reis & Irvy’s Froyo Robots are fully automated, 15-sq.-ft. machines that started in California in 2016. The machines dispense frozen yogurt and process transactions independently. Customers can customize their order, choosing from a variety of different frozen yogurt flavours and toppings. Each order takes approximately 60 seconds to dispense.

Ocado Group, a U.K. supermarket giant, is backstopping a London-based robotics start-up targeting foodservice commercial kitchens. The precision of the DK-One robot allows combinations of up to 18 ingredients onto plates, bowls or containers. They’ve also developed a smaller robot built for QSR and unique applications like measuring and dispensing candy, making ice cream, or pouring beverages. 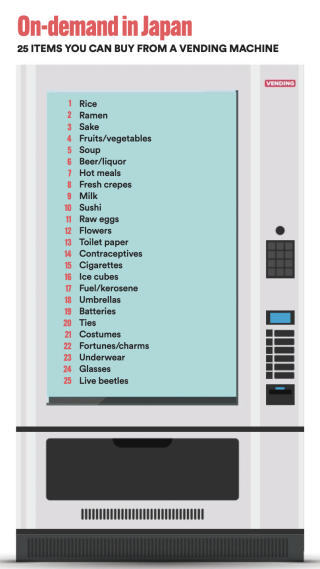 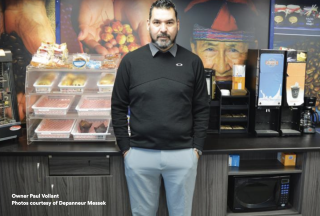 The store features an annex. The standalone room is open 24/7 and is equipped with two automated teller machines, a pop machine and a vending machine that sells sundry items like chips, chocolate bars, peanuts and rechargeable batteries. "It was a way for us to roll 24 hours a day,” says owner Paul Vollant. “We always try to be visionary.”