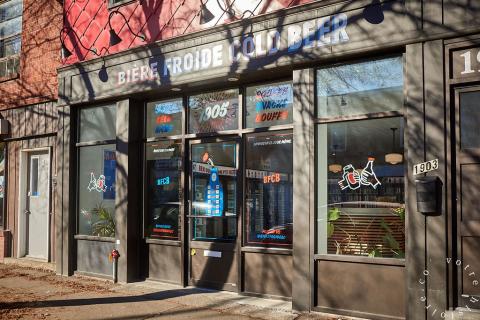 A bar in a retail setting. That’s how Samuel Kirk describes Dépanneur Bière Froide Cold Beer, the new convenience store that he and a partner opened on a busy Montreal commercial street in April.

“We wanted to differentiate by looking at a bar from a convenience store point of view,” says Kirk. “It’s really a modern version of a dépanneur with high-end products that are more curated.”

Located in a former dog-wash shop in Point St. Charles, an old working-class neighbourhood that is quickly gentrifying through an influx of younger, more affluent people and businesses, the new store sells more than 500 SKUs of refrigerated Quebec craft beers, wines, ciders and seltzers. It also carries an expanding array of locally- and Canadian-made snack foods, including chips, salsas, charcuterie, crackers, cheeses and frozen pizzas.

“We want to serve people who want something alcoholic with a variety of quality food products to accompany their drinks,” says Kirk.  “We don’t sell toilet paper, bread or milk like a regular corner store, but we’re just as handy and convenient for our customers.”

Kirk and partner Kevin Demers came up with their novel beer boutique concept during the pandemic, which resulted in closures and capacity restrictions for bars and restaurants as Quebec grappled with COVID-19.

Demers notably owns two cocktail bars in Old Montreal—The Coldroom and El Pequeño—while Kirk, an Australian who has lived in Montreal the past five years, has worked for Demers as both a bartender and bar manager.

According to Kirk, the passage last December of Bill 72, which amended Quebec’s regulations on alcohol permits to allow cash-starved restaurants to sell sealed containers of beer, wine and cider for takeout and delivery with food orders, provided the duo with both an opportunity and inspiration for their entrepreneurial venture.

“It got us thinking, ‘Hey, this would be a great way for us to pivot our skills from the hospitality industry to retail,” said Kirk.  “We’d use the same mentality of giving store customers an experience like we do in bars.”

After applying for and receiving a grocery permit—something that enables them to stay open as an essential service and allows them to offer home delivery—the duo rented an empty 2,000-sq.-ft. store on rue Centre, a stone’s throw from the public parks and bike paths that line the Lachine Canal and close to big office and manufacturing businesses, such as Northern Electric.

They spent north of $100,000 putting a large cold room in the backroom and remaking the 800-sq.-ft; storefront to resemble a bar.  “We put a huge U-shaped counter in the middle to help greet and engage with customers when they come through the door,” explains Kirk.

They also put mosaic tiles on the floor, vintage lighting around the store and installed “a whole bunch” of upright, glass-door display fridges along the walls.  “If not, you can’t have a business named Cold Beer,” quips Kirk.

In addition to in-store sales, which are handled by the store’s four employees, including Kirk, the business also offers same-day delivery services across the island of Montreal.

Despite the absence of big-brewery products and a limited selection of snack food items when it opened, Kirk said the store proved popular from the get-go. “The clientele is mega local, particularly young people who appreciate and look for craft beers,” he says.

Beer sales, Kirk adds, represent about 80% of the store’s revenues. “IPAs reign supreme, but blonds and pilsners are also popular,” he says.  “And we’re seeing other categories develop too, especially wine. There are a lot of great tasting Quebec wines nowadays.”

The store’s food offering—everything from potato chips from New Brunswick’s Covered Bridge; to organic PEI mussels; Ontario trout from Vancouver’s Scout Canning; cheeses and sausages from Quebec’s Charlevoix region; to frozen pizzas made in Montreal’s Little Italy neighbourhood (a recent addition that necessitated the purchase of a front-store freezer)—has also continued to grow in size and importance.

“It really gives the store a dépanneur vibe,” says Kirk.  “And we’re continuing to add more items as we see what people want and need.”

Though new to retail, Kirk says he and Demers are enjoying the experience.  “We’re already looking to expand and open a second location in another area of Montreal, and maybe even the South Shore,” said Kirk.  “Hopefully we can one day start selling franchises. You gotta dream big.”

The founders did away with a traditional c-store format and designed a store that looks like a bar. “We put a huge U-shaped counter in the middle to help greet and engage with customers when they come through the door.”

Focus on the customer

Drawing on a background in hospitality, the duo decided to create a customer experience that pairs a curated selection of snacks with craft beers that appeal to a young, local clientele.

With the pandemic reshaping consumer expectations and habits, the founders knew that delivery would be a fundamental part of their success right out of the gate.

The founders opened with a limited selection and expanded their offering over time. Now they’re talking about expansion. 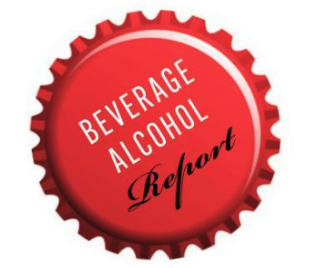 Amid a Canada-wide industry push, beverage alcohol may finally be ready for its long-awaited breakthrough. Are you?