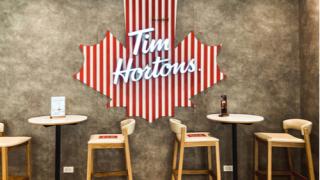 In one of the surest signs Canadian workers are returning to downtown offices, Tim Hortons says sales at its "super urban'' restaurants are rebounding to near pre-pandemic levels.

Restaurant Brands CEO Jose Cil called the turnaround at these locations a "testament to the improvement in mobility.''

"We saw accelerating underlying sales trends throughout the quarter as restrictions eased across the country and mobility increased,'' he said during a call with analysts.

"Comparable sales at our super urban locations grew nearly 30% year over year during the quarter, with each month growing faster than the prior.''

His comments came as Restaurant Brands, which also includes Burger King, Popeyes Louisiana Kitchen and Firehouse Subs, reported its net income attributable to common shareholders totalled US$183 million in its first quarter, up from US$179 million a year earlier.

Revenue for the company, which keeps its books in U.S. dollars, totalled $1.45 billion, up from $1.26 billion in the same quarter last year.

Analysts on average had expected an adjusted profit of 61 cents per share and $1.39 billion in revenue, according to financial markets data firm Refinitiv.