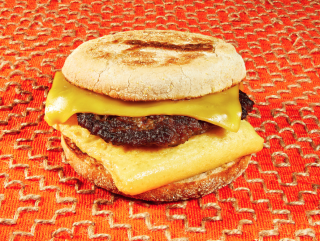 7-Eleven Canada is now a breakfast destination for dedicated plant-based eaters, with the launch of the chain's first fully plant-based breakfast sandwich available at locations across the country.

As part of its "Heathy To-Go" campaign, 7-Eleven's new offering is a triple threat, featuring Violife Cheddar Style Slices, along with Just Egg Folded and Impossible Sausage on an English muffin.

Made for busy mornings or fans of an all-day breakfast the Plant-Based Breakfast Sandwich is on offer in-store 24/7 at more than 550 locations in British Columbia, Alberta, Saskatchewan, Manitoba and Ontario. The $5.75 breakfast is also available for delivery through the  7now.com or the 7Now app until February 28.

While some QSR offer a breakfast sandwich made with plant-based sausage, the award-winning plant-based Violife cheese is an added draw for vegetarians and flexitarians looking to reduce meat and dairy consumption.

"Partnering with 7-Eleven Canada and other delicious plant-based brands to bring Canada this first of its kind breakfast sandwich is an exciting milestone for Violife. As more Canadians are looking for tasty, dairy-free and plant-based options, Violife and 7-Eleven are bringing a convenient solution for the busy morning commute," said Meryem Leyoussi, brand manager, Violife Canada. "Our deliciously melty cheddar style slices have always been a fan favourite since they're the perfect option for vegan, dairy-free, flexitarians, or plant-curious consumers. And now they can easily get their hands on some for their morning breakfast routines this winter."

The company was an early adopter of plant-based proteins, experimenting with plant-based sausage on its pizzas and this time last year it launched limited-time plant-based chicken tenders. It also offers a Mexican plant-based steak wrap

The efforts tap into consumers' growing appetite for protein replacement alternatives and the rise of flexitarians looking for meat alternatives. This is especially timely in January when many people resolved to eat less meat, as part of a commitment to healthier lifestyles in the new year.

7-Eleven Canada continues to evolve its foodservice offerings across the country. In Ontario and Alberta, the c-store giant is now featuring designated dine-in areas in select locations, as it also expands it beverage alcohol program.