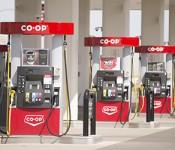 The head of the Slocan Valley Co-op says these are exciting times for the gas station/convenience store. The co-op has purchased two other gas stations in the area.

"It's been a long time coming, but it was always a `hurry-up-and-wait' situation,'' says general manager Chris Sapriken. "Now it's a matter of getting us set up for success from day one.''

The Slocan Valley Cooperative Association announced in August it had purchased two Husky gas station/convenience stores in Nelson and Trail.

The $4.3 million acquisition is part of a much larger purchase by the Federated Co-operatives Limited group, the overarching organization the co-op belongs to. That deal saw FCL purchase 171 Husky stations from Cenovus Energy Inc. last year. The deal includes a mix of gas bars, on-site car washes and convenience stores.

The Slocan Valley Co-op actually purchased the stations from FCL, in a deal that involved 23 other co-ops buying stations in their regions. Some local Husky sites - like the station in Castlegar - will remain in FCL's hands.

"We know those major centres are ideal for us to be able to expand our presence, and in that way, it gives us other opportunities to expand,'' he says.

While the ownership transfer happens on September 13, the takeover will take more than a year to complete, says Sapriken.

"It's not a cookie cutter where they drop the keys in your hand and you start running them,'' he says, noting FCL is in charge of rolling out the renovations and branding changes to the gas stations.

"We're just getting ourselves prepared for what will end up being operating them as they are, as Huskys, based on their existing contracts, until we get to a point next year to be able to begin conversion,'' says Sapriken. "And it's a conversion schedule across the entire of Western Canada.''

The deal also includes the co-op acquiring the delivery contracts to the independently owned Husky sites in Creston and Kaslo. The overall purchase will see fuel volumes increase roughly 60%, he estimated.

Sapriken says the purchase is good news for co-op members.

"Whatever helps strengthen the bottom line ultimately means that those profits go in that balance for member benefits, that balance for employees, and the community in terms of our contributions every year,'' he says. "We just have to be mindful there's going to have to be some investment needs, some upgrades.''

Eventually co-op members will be able to use their member numbers at the Nelson retail station, once its conversion to a co-op is complete. He said they're waiting to see if the Trail station will become a full co-op station; otherwise, it will be branded under the Tempo name.

The purchase has already resulted in another hire at the co-op - an office manager to take on the new administrative load.