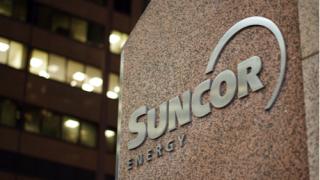 Suncor Energy Inc. said Monday that it has reached a deal with activist investor Elliott Investment Management LP that will see it undertake a strategic review of its Petro-Canada gas station chain with the goal of "unlocking shareholder value.''

The review of Suncor's retail business will include the consideration of a range of alternatives including a potential sale of the operations, the company said in a statement.

There are more than 1,500 Petro-Canada gas stations and store locations nationwide.

In an interview, Eight Capital analyst Phil Skolnick said he doesn't think Suncor will sell the Petro-Canada retail business in the end.

"If they go through with a big sale process with retail, it'll be a distraction to fixing the operational issues and personnel issues on the mining side,'' he added. Eight Capital downgraded its rating on Suncor to "sell'' from ``neutral'' last week.

But if Suncor does end up making the move to sell its retail business, Skolnick said there would likely be "multiple players'' involved in buying it. He didn't offer any ideas on who that could potentially be.

In a note to clients Monday, Credit Suisse analyst Manav Gupta said he does see the possibility of Suncor selling its retail business. Credit Suisse has an "outperform'' rating on the stock.

RBC analyst Irene Nattel said in a note to clients that Alimentation Couche-Tard Inc. would likely be interested in participating in the sale of Petro-Canada.

"As with any potential transaction of size, we would expect (Alimentation Couche-Tard) to be part of any potential process involving Suncor retail assets, but market concentration likely precludes it from bidding for the full network,'' she said.

In addition, Bloomberg is reporting that Couche-Tard is seen as potential bidder for Suncor retail unit.

In 2016, Alimentation Couche-Tard acquired a significant portion of Imperial Oil Ltd.'s 497 Esso retail stations. The Quebec-based c-store giant operates close to 2,100 stores across Canada and about 1,200 have gas stations. However, as reported, there’s a lot of overlap with Petro-Canada, especially in the eastern part of the country.

Parkland has also been in acquisition mode of late. The company currently services customers across Canada, the United States, the Caribbean region, and the Americas through three channels: retail, commercial and wholesale.

Couche-Tard and Parkland did not comment on the Bloomberg report.

Suncor's board expects to complete the strategic review in the fourth quarter of this year and will provide an update at that time.

"Suncor is committed to the ongoing renewal of its board of directors to ensure we maintain diverse and qualified directors who are charged with overseeing the company's strategy and driving shareholder value,'' Suncor board chair Michael Wilson said in Monday's statement.

Skolnick said the three new board members are "strong'' choices and will provide the right mix of mining and corporate transaction knowledge and expertise.

Elliott had expressed frustration with Suncor in April in what it called a recent decline in performance at the energy producer. In a letter, the firm called for an overhaul of Suncor's board and management, along with the possible sale of Petro-Canada. Elliott highlighted Suncor's safety track record, as well as other operational challenges and the company's lagging share price.

"We appreciate the collaborative dialogue we have had with Suncor's board and fully support the appointment of three new independent directors who will bring fresh, relevant perspectives into the boardroom, as well as the board's commitment to explore strategic options with respect to Suncor's retail business,'' Elliott partner John Pike and portfolio manager Mike Tomkins said in Monday's statement.

Suncor chief executive Mark Little resigned earlier this month, one day after the company announced the death of a contractor at its Base Mine north of Fort McMurray, Alta., the latest in a string of workplace deaths and safety incidents that have plagued the energy giant.

Two of the new directors will serve on the committee that the board has formed to conduct a global search to select the company's next CEO.

Gupta said Suncor's next CEO will likely be an external candidate.

- with files from Michelle Warren