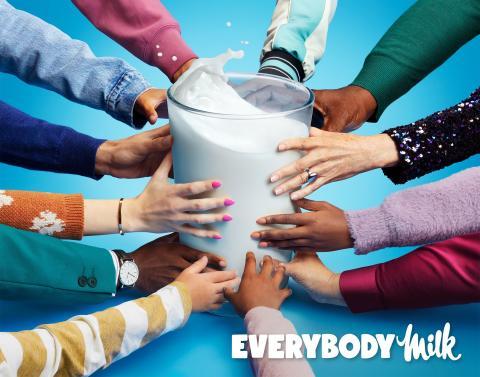 Dairy Farmers of Ontario (DFO) has launched a new marketing campaign, Everybody Milk, that celebrates the beverage’s role in milestones and celebrations throughout our lives – from milk in a glass to ice cream and cheese.

"Everybody Milk is aimed at uncovering consumers' emotional connection to milk and celebrating that love in a fun and meaningful way with the goal of increasing consumption," says Rosa Checchia, chief marketing officer at Dairy Farmers of Ontario.

Dairy fans can visit the nearly 10 ft. Everybody Milk Tower and enjoy a glass of Ontario milk served from a customized vintage trailer.

The creator behind viral TikTok recipe channel @Everything_Delish, Jamie Milne, will be on-site capturing content and sharing her own love for milk.

DFO is increasing marketing efforts, having recently inked a multi-year agreement with the NHL that will see its “Milk” insignia appear on the Toronto Maple Leafs game sweaters starting this season.

The deal builds on a multi-year partnership between the two organizations, which includes grassroots and community programming focused on healthy, active living and access to the game of hocke

“Just as milk nourishes healthy bodies, Ontario’s dairy farming families proudly nourish healthy communities, and that’s been the focus of our ongoing partnership with the Toronto Maple Leafs,” said Cheryl Smith, CEO of DFO, in a release.. “Placing our Milk logo on the Leafs’ sweaters is a symbol of this shared commitment, and of milk’s role in building strong bodies and healthy lives.”

-with files from Michelle Warren